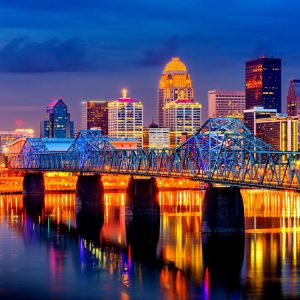 What: Fourth of July Celebration!

The 2017 festival will feature upbeat music in the genres of Funk, Soul, Hip-Hop and Jazz. Columbus, Ohio’s Neo Funk band MojoFlo will headline the Harbor Lawn stage at 8:40pm with their infectious rhythms, hard hitting horns, seductive melodies and a meticulously crafted stage show, including the Kentucky debut of frontwoman Amber Knicole’s aerial performance. Jakarta Record’s Dr. Dundiff & Otis Jr. lead a Louisville collective that blends a beautiful mix of future soul, hip-hop and jazz. Their performance will begin around 7pm. Don’t miss it because you never know what the mad doctor and Mr. Junior will throw at you – maybe a whole string section or a gospel choir!

Jenna Dean will perform their blend of southern soul splashed with California sunshine at 6pm. The bi-coastal band and socially conscious hip hop group includes rapper/vocalist Anthony Raspberry and guitarist/producer Jason D’Mello, Joel Goodwin on drums and keys, Jamison Taylor French and Jon “JP” Poww on bass. From the inspirational grooves of West Africa to the pulse of Latin clave, the Afrophysicists cover a lot of ground with their mighty horns, melodic vocals and strong interlocking guitar parts, all propped up by a driving rhythmic foundation of percussion, bass and drums. Their songs are totally infectious, displaying incredible musicianship while maintaining world rhythmic versatility. They will open the event at 5pm. In between all bands, guests can dance to beats by Louisville’s own DJ Kaos – World Renowned DJ (Slick Rick the Ruler), Party Rocker & Encourager.

The family-friendly Louisville Waterfront Fourth celebration will open at 5pm with a variety of activities produced by popular arts and cultural attractions in the Catfish Louie Kids Area. Activities will be nestled in the shade of the trees near the Children’s Playground and will provide activities suited for a variety of interests. The Kentucky Science Center will provide science activities and demonstrations. The Jug Band Jubilee, WUOL’s Summer Listening Program and Louisville Folk School will help children create their own musical instruments and conducting batons; children can then join a jug band performance or conduct a jug band!

There will be art activities for children by Louisville Visual Art, nature activities by Waterfront Botanical Garden, putt putt, a petting farm and pony rides! There will be a card writing activity by Flags 4 Vets where children can create a message for a member of the U.S. Armed Forces. Louisville Metro Police Department and Louisville Fire Department will have a helicopter and other safety equipment on display for children and families. These activities will occur from 5-9pm, and are completely free.

Elsewhere in the Waterfront neighborhood, on Saturday, July 1st, the Vintage Urban Flea Market will bring its Fleur de Flea back to the Festival Plaza, free and open to the public. Flags 4 Vets, the Louisville based National Flags For Veterans Graves program, will create a special July 4th patriotic flag installation beginning at noon on Saturday July 1st. The public is invited to help place 15,000 US flags, one by one, to spell “USA” in a 170’ x 450’ pattern. Volunteers are invited to help for a couple of hours or a few minutes to place a flag or two in tribute to members of their family who now serve or have served in the United States Armed Forces or as other first responders. After July 4th, the 15,000 flags will be collected and distributed across the USA to be placed on veterans’ graves. The installation will continue through the evening of Tuesday, July 4th.

The Louisville Bats have a game at Slugger Field on July 4th, and they are joining Louisville Waterfront Park as a sponsor for the fireworks show. The Bats will face the Toledo Mudhens at 6:45 in the first of a 6 home game stand. The first 2000 fans on the 4th will receive a free patriotic hat. The Belle of Louisville has public cruises throughout the weekend and a fireworks cruise at 8:30pm on July 4th, which will offer the opportunity to enjoy fireworks from the deck of the oldest operating steamboat in the country.

Captain Salvador Melendez of the Louisville Division of Fire touts Louisville Waterfront Fourth as a safe place to view fireworks. “Whether you are enjoying the fireworks from the Harbor Lawn on July 4th after the Bats Game, or even while cruising on the Belle of Louisville, the beauty of this offering is that the fireworks will be shot by the professionals.” Melendez added, “There are hundreds of annual emergency room visits nationwide due to fireworks injuries, including significant numbers of documented structural and property damage. This is a safe option for families to enjoy fireworks this Independence Day.”